The 10% interest has been acquired through the execution of a Settlement and Transfer Agreement between Jadestone and PT Hexindo Gemilang Jaya.

In return for the transfer of Hexindo’s 10% stake, Jadestone has released Hexindo from unpaid amounts relating to Hexindo’s interest in the Lemang PSC and paid a consideration of $500,000 (inclusive of transfer taxes, which Jadestone will remit directly to the Indonesian government).

The Lemang PSC contains the Akatara gas field development, which reached final investment decision in June. The field has been independently estimated to contain 18.7 mmboe of gross 2C resource, and is being developed to displace coal in local gas-fired power generation, as well as condensate sales and LPG for local residential use.

The main gas-bearing reservoirs in the Akatara field are the UTAF-B formations, which were deposited in shoreface to foreshore marine environments and are expected to be laterally continuous across the field. The range of porosity and permeability in the UTAF reservoirs is 17-28 % and ~120-9,610 mD respectively.

Production remains on track for the first half of 2024. Once onstream, the Akatara development will broaden Jadestone’s production base, as well as increase the proportion of gas in the production mix.

Jadestone intends to pursue a low-cost development of the field, including efficient re-use of existing wells and infrastructure, thereby minimising incremental impact on the local environment.

Several further initiatives to reduce GHG emissions and enhance the environmental performance are also being considered as part of the detailed engineering and development optimisation studies. Jadestone anticipates a gross development cost for the field prior to first gas of US$94m.

Paul Blakeley, President and CEO, said, “We have acquired Hexindo’s interest for US$0.26/boe of 2C resource, compared to the original acquisition cost of US$0.70/boe in 2020 – a very attractive bolt-on deal for Jadestone, particularly given the significant commercial and development progress since the initial acquisition was announced. Activity at the Akatara gas development project is progressing well and we remain on track to deliver this key organic growth project for Jadestone in the first half of 2024.”

In Vietnam, it is in early-stage negotiations with the end-user of gas from Nam Du and U Minh, and currently targeting final investment decision in H2 2023. Group production will be 11,000-13,000 boe/d according to 2022 guidance. 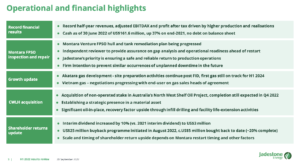